Concept work for Main character of the Overlord and the three Advisers, the spy, Knight and Councilor.

Based on previous concept work (Image on bottom).

Difficult to draw in a 2D Hand drawn style? What about colouring and shading?  Would it be pleasing?

Even for an evil overlord it’s over the top.

Again based on past concept work. Bird like spy design, Diplomatic attitude?

Diplomats are basically spies you know about.

Uses ornate dresses so can disgard it later and move unseen since everyone thinks he’s a giant birdman?

Don’t feel the designs on the right work very well, they lack, well they’re just not worth taking further.

Cloak with hood? NAh, Too over the top and fabric is complicated.

Squarer more utilitarian look Might work better for the knight than for the Councilor. 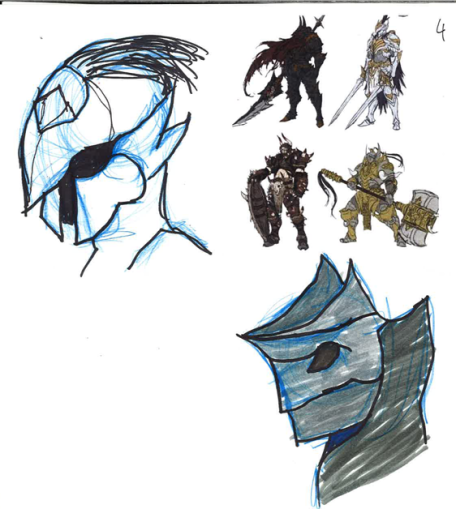 Silly over the top, wanted a more simple design than the complicated points and angles these ultimately created.

Yet, still like the idea of the Councilor having a mask.

Previous artwork, the bird like figure inspired the idea for the Spy, while the mask I like for the councilor and the bulky figure between them in the back is something I like to use to form the knight.